41. Next you are given a quadrilateral with fixed perimeter and you want maximise the area. What shape will it be? Prove it.

Solution. A square. We will first prove that it is a rectangle, then a square.

Since the area of a triangle can be expressed as where is between 0 and 1, the area of . Hence, the area of the quadrilateral is and . Adding them together, we get , which, from the AM-GM inequality, .

The first equality is achieved when all angles are right angles, so the quadrilateral is a rectangle; the second equality is when , so it must be a square.

The third one: too complicated; you may refer to this article.

44. Prove that the angle at the centre of a circle is twice that at the circumference. 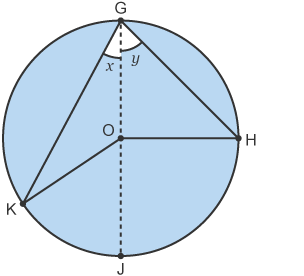 45. How many ways are there in which you can colour three equal portions of a disc?

In general, if there are colours, first choose the colours, then use them. The number of colourings is .