In the last article, I introduced you to the exciting new features of the editor in Cocos Creator 3.6. As you can see, the new version brings a nice improvement in both the appearance and the productivity of the editor.

Next, let's take a look at the rendering-related features added in Cocos Creator 3.6.

Rendering-related features you need to know

This is a great feature that can greatly enhance the realism of non-smooth surfaces, see the following figure.

From the above image, we can clearly perceive the difference between the effect with convolution (GGX Convolution) and without convolution (Mipmaps).

What is Reflection Convolution based GGX

It means that the GGX algorithm is used to generate the Mipmap levels of Cubemap which is used for Environmental Reflection Calculation.

Does it run with high performance?

How do we generate and use it?

This is the Skybox panel in Cocos Creator 3.6, and we focus on two things.

Tips：PBR materials handle ambient lighting by treating the ambient map as a giant wrap-around light source, with each pixel in the map representing a direction of light brightness. This processing is called IBL (Image Based Lighting), and IBL consists of two main calculations: diffuse and environment reflection.

Env Lighting Type There are three types to choose from.

How to bake reflection convolution map

If you don't want to use it, just click the Remove button and the Mipmaps of the environment map will be used in the IBL stage.

Can you elaborate on the environment reflection convolution?

For those who want to understand the principles behind it, let's start with two terms.

It is obvious that the Cubemap generated by the GGX algorithm has Mipmaps that are blurrier at each level than the previous one, which cannot be achieved by ordinary Mipmap.

Developers interested in learning more about this can search the web for more details.

This is a technique that renders high quality dynamic shadows.

So what is CSM？

Why it is called 'Cascaded', Please see the GIF below：

In CSM, the scene inside the view cone is divided into four layers from near to far (in Cocos Creator 3.6, there are 4 CSM layers by default), and each layer corresponds to a ShadowMap, which is used to calculate the most suitable ShadowMap according to the object position in the shadow sampling stage.

What about the DrawCall overhead of CSM?

Although the 4-layer CSM requires four draws of the scene, the additional DrawCall overhead is no more than 40% of the normal ShadowMap due to the engine's culling mechanism and the optimization of the shadow pass draw.

What about the memory usage of CSM? In the Scene Properties panel, there are 4 options for ShadowMap Size to choose from.

In short, ShadowMap memory usage is the same with CSM on and off.

In the previous introduction to the editor, we mentioned the rendering debug view feature, which allows you to view the CSM layers in visual, as shown in the following figure.

This feature allows us to visually see the changes at each level when adjusting Shadow Distance and Shadow Invisble Occlusion Range, and to pinpoint the position of each level as needed.

4 layers for CSM is too much, can it be less?

Currently, it can only be set to 4 layers. Later, it may open up the layer settings and the lambda distribution settings of the layers to achieve more accurate layer distribution management and more performance savings.

Cocos Creator 3.6 adds a new Noise Module to the particle system, which makes it easy to create some random particle drifting effects, as follows.

The following parameters are currently available for the particle noise module.

Andy, One of member from engine team says:There are 3 main reasons to use it.

Look at this irregular, fluttering butterflies, only need one particle emitter to deal with, is not great?

In addition, we can add details to the particle effect using the Noise module, as follows.

If you want to achieve a small 3D snake that bends and twists and is under your control.

If you want to generate an animated curvy line in 3D space that are dynamically generated according to the indicated direction.

If you want to take advantage of your talent, write a set of 3D effects, clouds, and weather systems by yourself.

The feature you need most is to update model data dynamically.

Prior to v3.6, Cocos Creator provided only a function for creating static models: the utils.MeshUtils.createMesh function. However, each time it was called, the mesh-related objects were rebuilt, and the performance was only suitable for use in cases where updates were infrequent.

In v3.6, the utils.MeshUtils.createDynamicMesh function is provided specifically for handling dynamic models, as shown in the following figure.

When creating a dynamic mesh, 3 parameters should be passed via options.

In most cases, we have only one SubMesh, so it is most convenient to fill it with data when creating it. The prototype of this function should be like this: createDynamicMesh(geometry,options):Mesh.

However, the designer felt that this was not flexible enough, so she added primitiveIndex. This parameter is used to specify which SubMesh the given geometry data belongs to.

The purpose is: update the SubMesh specified by primitiveIndex with the given geometry data.

Note: Don't forget to call the meshRender.onGeometryChanged function after updating the data.

About the number of dynamic mesh vertices

Recall the two properties in options.

The reason it is called "max " is that these two values mainly determine the size of the allocated mesh data, while it is the geometry data that determines how much space is actually used, and as long as the vertex and index data of the geometry data is not out of range the values specified by options, it will work fine.

For the case of fixed vertices and indexes, it is recommended that the values of maxSubMeshVertiecs and maxSubMeshIndices be consistent with the geometry data to avoid unnecessary memory wastage.

However, for the case where vertices and indices will change, you need to make sure that these two values always satisfy the needs of geometry.

Suppose we want to implement a mini-game. It has 10x10x10 small cubes that form a large cube, and when the user taps on a cube, the cube disappears.

We create a dynamic mesh with only one SubMesh, with maxSubMeshVertiecs of 8000 and maxSubMeshIndices of 36000.

When the cube disappears, we just need to remove the corresponding vertex and index data from geometry and call updateSubMesh to refresh the mesh.

The Cocos Engine team provides an example of a loong. Clicking on the Update button will display the loong from nothing to complete, as follows.

For those who need to study, you can check the official Github repo: https://github.com/cocos/cocos-test-projects/tree/v3.6

In nature, there are objects with a large number of small, flush grooves on their surfaces. Ordinary graphical lighting models cannot reproduce the lighting effects of such objects' surfaces well, so a technique was created to specifically simulate such lighting effects: anisotropic lighting.

Although the implementation principle is complex, using anisotropic lighting in Cocos Creator 3.6 requires only the following three steps.

The effect rendered in Cocos Creator 3.6 is as follows.

What is Surface Shader？

Surface Shader is not a new shader species, it is a process and framework provided by the engine to facilitate shader writing. It encapsulates the underlying Vertex/Fragment Shader, eliminating the need to write repetitive code, thus reducing the complexity of shader writing and improving the efficiency and compatibility of shader writing.

Why Surface Shader is needed？

As the 3D features of Cocos Creator are getting better and better, the workflow is getting perfect. More and more 3D developers, art, TA, and computer graphics enthusiasts are becoming Cocos Creator users.

About Shader writing, the feedback I received focused on the following points.

How simple it could be?

As shown in the figure below, a complete standard-fs has only 10 lines in the Surface Shader. 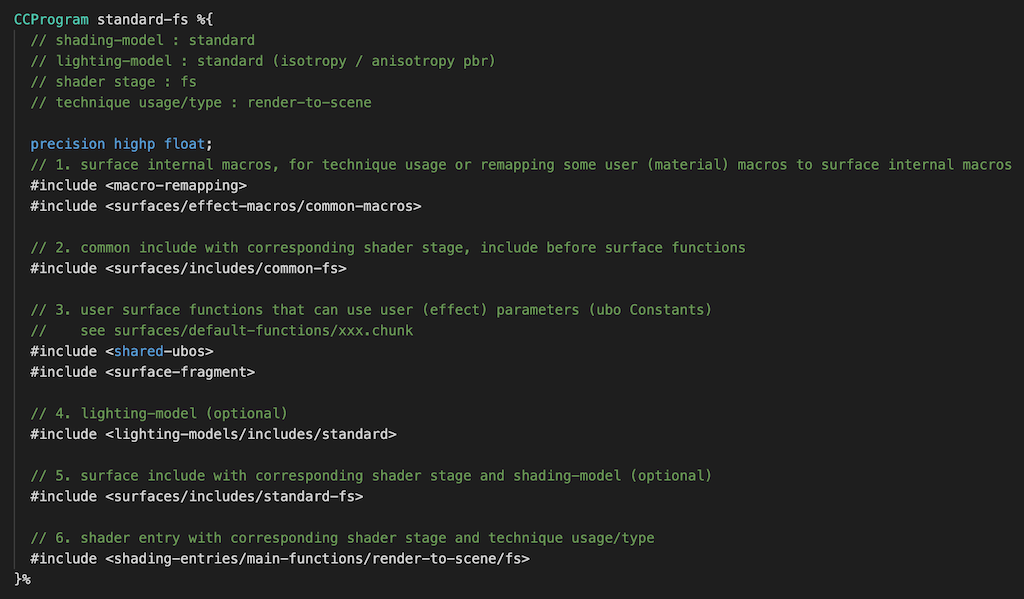 In Surface Shader, a complete Vertex Shader or Fragment Shader needs to contain six parts: Macro Definition, Include Files, UBO Definition, Lighting Model, Shader Stage, Output Target. Developers can customize each of these six parts as needed, and keep the default for the parts that don't need customization.

How to customize Surface Shader？

There is a complete explanation of how to write a Surface Shader in the official documentation, and one of the most important things is the macro definition mechanism.

In the Internal/chunks/surfaces/default-functions directory there are three files common-vs, standard-fs, and toon-fs, which define all the built-in functions that can be replaced with macros. The following figure shows.

The above is about Surface Shader writing, I think the most core mechanism part. Due to the limited space, the rest of the content will not be developed in detail, you can combine the official documentation and surfaces/standard.effect to study.

1、The Rendering Debug View feature in the editor only supports materials that use the Surface Shader.

2、Anisotropic lighting is currently only supported in the Surface Shader.

3、For migration, compatibility and readability, it is recommended that the Surface Shader be used in preference for new projects.

The rendering-related updates are mainly focused on Reflection Convolution, CSM, Noise Module, and Dynamic Mesh. There are of course many rendering-related enhancements that are too subtle to appear in this article, but that doesn't mean they're not important.

The value of these details will be left to you to explore. What are you waiting for? Open Cocos Creator 3.6 and take action!

In the next article, I'll take you through the performance improvements in version 3.6, so stay tuned!